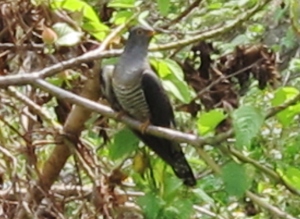 Today I figured that it was about time to get the Taiwan Hwamei onto the year list. This is an endemic species that most visiting birders see in the car park of the Longluan Lake Nature Center near Kenting; however, I have yet to encounter it there despite many visits.

My reliable site for Taiwan Hwamei is at Shoushan (Monkey Mountain), a mere 10-minute drive from my house. I parked near the zoo and walked up the wide approach road, which is flanked by mature trees and is a reliable spot for Taiwan Barbet. The best area for Taiwan Hwamei, in my experience, is the area around the start of the trailhead and the first 200 meters or so of the trail to the Emerald Pavilion.

This is a skulking species that is easiest to see when singing; unfortunately, none were singing today, and even if they had been, there’s a good chance they would have been drowned out by the chorus of loud voices and radios from the many hikers in the area this morning.

Undeterred, I walked the first section of the Emerald Pavilion trail, which passes the zoo’s peacock enclosure. Shortly afterwards, on the right, I heard some scraping in the leaves, and it was relatively straightforward to get decent views of a pair of Taiwan Hwameis (they seem fairly used to people here).

Alert to the possibility of Chinese Hwamei, or hybrids, I studied each bird carefully. Neither had any sign of an “eyebrow”, and each bird had a lovely golden-brown crown and nape consistent with pure Taiwan Hwamei.

With the Hwamei safely onto the year list, I headed north to Yuanfugang Wetlands Park. The most notable bird here was an excellent Oriental Cuckoo, which showed very well in small trees along the eastern end of the mangrove reserve. The bird was clearly a migrant and was therefore silent; separation on plumage and size of this lone bird from the almost identical (and some would say, dubiously split) Himalayan Cuckoo was impossible. I was happy to call this coastal migrant an Oriental, on the premise that locally breeding “Himalayans” probably head straight to their breeding grounds in mountain forests upon making landfall in Taiwan.

Also of note, my first Oriental Pratincole of the spring, which flew overhead while I was watching the cuckoo. The small wetland next to the factory had only one Pheasant-tailed Jacana today, but 9 Garganey (including 5 drakes) was my highest count for this site.